Ok so I’m blasting Boogie Down Productions and KRS-ONE all day long. I apologize in advance but music finds a way to creep into most of these football related articles.I LOVE MUSIC.Sorry.So todays lesson is to teach yourself something, find your Philosophy.    Listen to KRS-ONE, end of lesson . 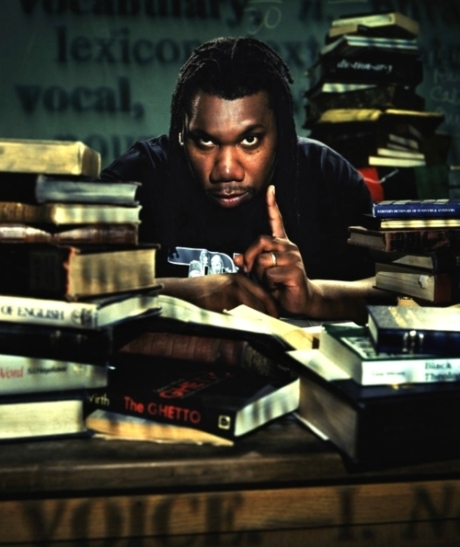 Romain Kelly,the 6’3 201 pound junior wide receiver from Spartanburg has quickly become a nightmare for opposing teams defensive backs.So far this season he has 51 catches for 672 yards. 51 catches in an offense that usually sees 6 or 7 different receivers catch passes in each game. 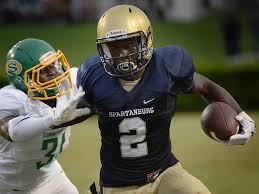 Born and raised in Charleston, South Carolina. His family saw that he had talent so he moved here to Spartanburg and now lives with his uncle,

Bernard Casey,who has been very instrumental in developing Romains affection towards sports.”He has taught me a lot about Football and the other sports I played like Soccer ,Baseball and Basketball.” Romain also added,” When I was young he would take me to High School games and we would watch Saturday and Sunday football. My Uncle made sure no one worked harder than me. I worked everyday during the off-season and he would just push me to be successful. He made sure that i didn’t just settle for average, he taught me to be Great.” Romains uncle is clearly his biggest fan, he attends every game. “He helps me set my goals for every game.” Kelly’s family that still lives in Charleston comes to support him at Spartanburg home games. Romain hopes one day to be have a career in engineering after college and football. 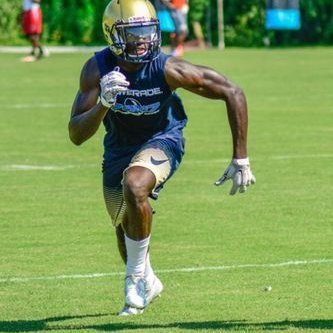 I asked Kelly about the brotherhood that seems to engulf the Spartanburg Wide Receiver Unit known as DEATHROW . He said,”I Believe over the summer and so far this season we have gotten better as a unit. We all worked hard and our results are remarkable. We have a lot of weapons; Josh Johnson #9 , Eric Rice #17, Damyjai Foster #5 and Tommy Washington #1.. we all care about each other a lot, we have a close bond that no one can break.. we are very competitive. If we play as a unit we are unstoppable.I care about my teammates more than anyone. Every time I get on the field… I play for the man that’s beside me. I rather see my team win as a whole than as individuals .”

Not a Bad Philosophy to have…

Assistant Offensive Coordinater and Wide Receivers Coach Nate Harris said about Romain,”As a freshman, he told me to tell the 9th grade OC to just throw it up from the 40 and he will win the game!! The next play we was celebrating his game winner! He’s passionate, humble , and wants to be the Best to ever come thru.”

This Friday is a home game against the Byrnes Rebels,but before we get to that game and what it means to Romain..I asked him about the previous two weeks.” Westside was more of a mental game then physical for me , knowing they where 5-0 and had a lot of Division 1 recruits, I was more focused in practice.” He went on to add,”Against Northwestern, I dropped a touchdown pass that probably could have changed the game. The hard part about it is knowing I let the man beside me down. The good part was that moment.. made me humble & hungry all in the same stroke. I’m more focused then I’ve ever been!!!”

Romain looked focused at Westside,He had 8 receptions for 77 yards .  .

When it came to discussion on upcoming Byrnes game, Kelly became a little bit more reserved. During the summer.. Byrnes High School,the community of Duncan,the Rebels Football Program and a family lost 16-year-old MARKELL NESBITT in a tragic drowning accident.

“This game also means a lot to me because, I lost My cousin / brother this summer, he drowned in Lake Lyman.   The week before he had the winning touchdown in a 7 on 7 passing tournament. I have dedicated this season to him.. #MN23… We had dreams to play with or against each other so it’s up to me to finish of our dream! I’ll start that process Friday Night.” Romain continued,”The Rivalry game vs Byrnes have always been a big rivalry since I was little. I played last year but I feel like this year is challenging because I have a bigger Role to play.”

The role of healing himself….for  Markell.

“EVERYBODY WANTS TO BE A BEAST UNTIL THEY HAVE TO DO WHAT A BEAST DOES”
Sometimes one’s own self must find that balance. The balance between perfection and authenticity. Capturing that balance to be a little more perfect in what you say and do. A little more authentic in how you are and who you are.
I have no doubt that Romain Kelly doesn’t mind doing what a beast does.
this article is dedicated to Markell Nesbitt on behalf of his family and friends and
THE SPARTANBURG HIGH SCHOOL VIKINGS FOOTBALL TEAM