Just Watch What You Say!

The Iceberg/Freedom of Speech… Just Watch What You Say! is the third studio album by American rapper Ice-T. The album was released on October 10, 1989, by Sire Records and Warner Bros. Records. The album has an uncharacteristically gritty sound, featuring some of the darkest musical tracks that Ice-T ever released. 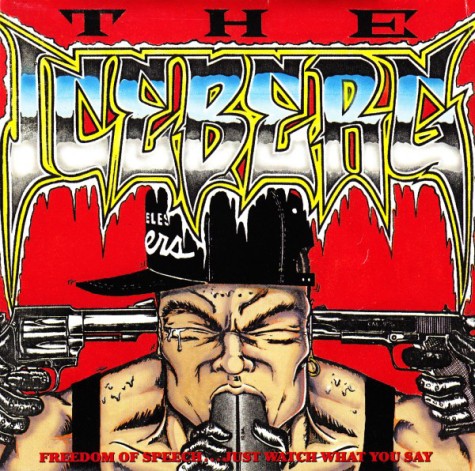 For the record,I do this because I love Spartanburg. I love Football.I love SPARTANBURG FOOTBALL. I’ve seen about 340 Spartanburg games in a row. I’ve seen close to 400 games in my life. So if you get all jerked up reading this,well..it was probably meant for you.

Never in August, when I decided I was going to start this blog, did I think I’d be writing about the things that you will read below. One needed to be said.The Other asked for it.

Ok ,so… Spartanburg didn’t beat Boiling Springs.I finally have said it.I came to terms with it,over the weekend.It always seems harder to swallow a loss when you feel like you were for sure the better team.This feeling has reared its ugly head in my stomach three times this year.I personally feel we are 2 touchdowns better than Etowah and Boiling Springs.We are most capable of beating Northwestern by two touchdowns. The fact of the matter is we did not.We are 3 plays away from being undefeated.I know that’s the cynic point of view but we actually are. I’m not here to second guess any referee calls or any kid. I’m not going to say anything at all about coaching.What I am gonna say is totally about our fans.

YES I AM CALLING YOU OUT.The first half of The Spartanburg vs. Boiling Springs game was quiet. Dead. It’s almost as if the days of Coach Carr,Sitterle,Davis and Miller have left Viking Fans with a sense of entitlement and unrealistic expectations. No High School team with our tradition should ever be 6,000 ppl deep and that quiet.Don’t you dare say well its homecoming and people are socailizing.That’s crap. Are we all not there at Gibbs Stadium for the same reason?

There is a “vibe” in sports,especially football.Hell,even in life.If people support you by “cheering” you on.You tend to perform better.At the very least,below the surface,you try harder. It’s embarrassing and puzzling to me, to sit and look around at every other person preoccupied with someone’s gossip or the phone. I remember as a kid,we would argue about who had to answer the phone if it rang during dinner.That’s right,you didn’t even wanna answer it.It was almost a punishment to answer the phone if you were doing something with more meaning.

I guess what I’m saying is a AC/DC bell from a song from 1980 SHOULDN’T BE THE  THING THAT MAKES YOU MAKE NOISE ON 3RD DOWN.

It should be Second Nature to you.

Have you already forgotten these are kids? They battle for themselves,team mates and coaches in front of us.We are merely spectators to the spectacle.Just imagine this past Fridays game in an empty stadium. Is it Hard to visualize? It’s not for me,cause for the 1st half it might as well been empty.

I know most people at the game won’t read this.Most people probably don’t even care,but that’s another issue all together.id something happen to make us all “to good” to make some noise.Are you too wealthy to be seen standing up acting like an insane football madman? Are you disenfranchised enough that it would be “uncool” for you to cheer?. The funny thing is, and by funny I mean stupid..alot of you tailgate and drink before the game. I see it,I smell it. I also see and smell the B.S. that comes out of your mouth when things aren’t going our way.

You will blame a kid who has thrown for 240 plus yards with only ten incompletions, of which three were dropped,one was a throwaway to avoid getting sacked and the others,well he missed.Do you know why he missed them? BECAUSE IT’S HARD. It’s hard to throw a football 25 yards much less hit a moving target in the hands. It should not be placed on the shoulders of any coach or kid to win the game,when you won’t get off your ass long enough to show support.

It’s not Will Lawsons fault we lost.It’s yours.It’s mine.When is the last time you talked to a student athlete and told them thanks? You do know the sacrifice they offer up to us,”the football gods” every day right? Next time you want to complain about something on field,why don’t you do something off the field…like get together with your “squad” and say you know,”next friday night we are gonna go to Gaffney and be as loud as possible”.

Can you do that? i doubt it very much.

I dare you to prove me wrong.

NOW BACK TO BOILING SPRINGS..

Listen if you don’t want to do an interview or article with me that’s fine.No Big deal.I ask you because I want to educate myself and our fans on you.It’s toatlly up to you,But do you really have to tell your Mom?

I come home to some email message crap from some Boiling Springs punk’s Mother,(yes it is all I can do to not write your name). I tried to “trick my son into a public slander campaign”..and my favorite..”all you promote is hostility towards the other team”..

Did you feel that? That was my head exploding because I did not know that people were still this dumb.

I’ve written articles on players from every team(and some of their fans) that we have played that would do it.The two that did not …BYRNES AND BOILING SPRINGS.

So if the shoe fits,I’ll wear it.There is not a single kid I’ve talked to that has come back to me and said I wrote anything negative about anybody. As far as I know,the kids love it,the fans love it,7000 reads by 4,700 people from 13 different countries are reading this blog about my favorite football team in the world.

What I give you on the surface is me.It’s real.The best way I can help you understand is A 500 dollar YETI Cooler in the back of a 700 dollar truck ,doesn’t make your truck worth 1200 dollars.

and Beating Spartanburg by a field goal in overtime,does not make you region champs.